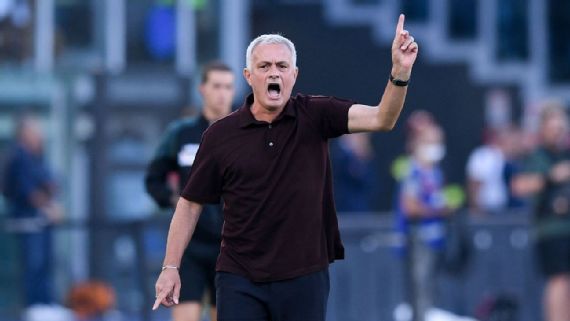 After his team was denied a penalty in a 1-0 loss to Atalanta on Sunday, Roma manager Jose Mourinho stated his players should dive to win more penalties.

Mourinho was sent off for criticism after referee Daniele Chiffi denied a penalty after a collision between Roma&rsquor;s Nicolo Zaniolo and Atalanta&rsquor;s Caleb Okoli.

– Watch LaLiga, Bundesliga, MLS, and other sports on ESPN+ (U.S.)

Roma were unable to respond to Giorgio Scalvini&rsquor;s 35th-minute goal, and Mourinho said afterwards that they would have had greater luck if Zaniolo had not tried to stay on his feet.

“It was a clear penalty,” Mourinho remarked. “I later asked the referee why, and he made it clear to me that it was because Zaniolo did not go down.”

“As a result, I have to adjust my instructions to my players: don&rsquor;t attempt to stay on your feet, don&rsquor;t play the ball, be a clown as those who dive like they&rsquor;re in a swimming pool do in this league, since it is obviously how you get penalties.”

The defeat at the Stadio Olimpico dropped Roma to sixth place in Serie A, with 13 points from their first seven games.

Paulo Dybala was injured during the warm-up, and Mourinho stated that his team missed the Argentina international&rsquor;s incisive play.

“It went horribly because we lost a game that we should have won easily given the way we performed,” Mourinho explained.