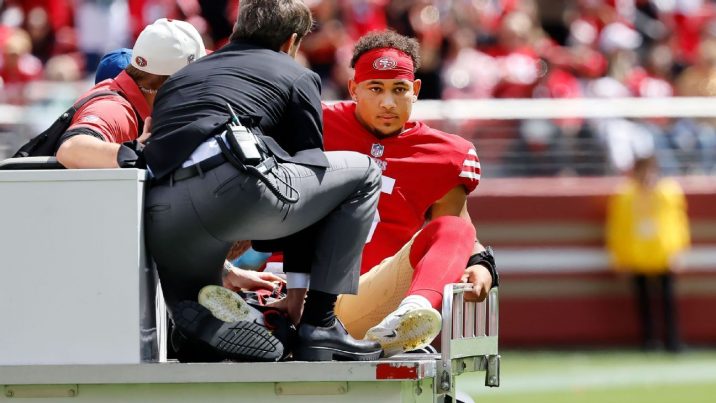 Lance broke his right ankle with 2:20 remaining in the first quarter of the Seahawks‘ 27-7 victory on Sunday. With Lance now out, backup Jimmy Garoppolo took over at quarterback and finished the game.

“It&rsquor;s always difficult, especially when it&rsquor;s a big one,” Shanahan said. “You have so strong feelings for someone. It&rsquor;s unfortunate, but you don&rsquor;t have time to dwell on it. You have to get straight back into the game, and the players did an excellent job of it. I&rsquor;m overjoyed with the victory, but it&rsquor;s a touch depressing in the locker room.”

When the Niners returned to the locker room following their victory, Shanahan struck a similar tone with his squad, encouraging them to be happy of their success but to take a time to remember Lance.

Lance was hurt on a second-down run on a zone-read play in which he had the option of handing it to receiver Ray-Ray McCloud or running it himself up the middle. Lance selected the latter and clashed with Seahawks linebacker Cody Barton after gaining 2 yards. Lance stumbled as his right ankle appeared to fold beneath him.

Lance appeared to be poised to get back up, and center Jake Brendel attempted to assist him, but he quickly fell back down, and the cart was called out to assist him off the field. Lance&rsquor;s right leg was also placed in an air cast as teammates poured onto the field to cheer him on.